The mission of the Catholic Media Association is to build and strengthen the value, effectiveness and identity of Catholic media by facilitating the professional development and spiritual growth of our members. We contribute to the Church’s mission of communicating the Good News and evangelizing the modern world by engaging and supporting Catholic media.

The Catholic Media Association is an organization of Catholic publishers and media professionals united in the action of servicing the Catholic Church. Incorporated in 1911 to serve the growing community of Catholic print publications, today its diverse membership uses all mediums to serve Catholics; and the association serves its members through social and educational interaction.

We encourage you to review our membership classes, read the Fair Publishing Practices Code, and consider joining the CMA.

The CMA vision affirms that effective communications lie at the heart of the Church’s mission to preach the Good News to all. 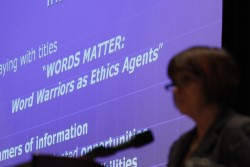 To support this mission in today’s media-intensive and diverse world, the CMA is a trusted and primary provider of:

The success of the CMA arises from the participation of its members in the association — supporting, encouraging and sharing with their colleagues and peers. The CMA encourages collaboration not only among its members but also with Church leaders, Catholic organizations and with the broader secular media to effectively accomplish the mission of Catholic communicators.

History of the Catholic Press

As the United States was forming, nativism, or opposition to immigration, was strong. This lack of social standing placed pressure on immigrants and created a need to unite and educate, to bring news from home, and to fight for civil and religious rights in a new country. The immigrants accomplished this by forming societies and associations; creating Catholic journals and newspapers.

Bishop John England was an experienced editor who emigrated from Ireland. He initially used the secular press to explain Catholicism but soon realized that he needed his own vehicle to address misrepresentations of the faith. Bishop England started the first Catholic diocesan paper, the Catholic Miscellany, in 1822 in Charleston, SC.

Other bishops did not launch papers at this time, but by 1837 they welcomed the independent Catholic papers at the close of the Third Plenary Council in Baltimore. They expressed their wishes that even though the publications were not officially sanctioned by the bishops, the clergy and faithful should support them. They noted that the journals were useful to “explain our tenets, defend our rights and vindicate our conduct”. In 1884, Bishops recommended that each Catholic household receive at least one Catholic periodical of good repute.

In the last quarter of the nineteenth century, Catholics made an asserted effort to move from parochial and ethnic organizations to national organizations and professional associations. Editors and publicists discussed forming the Catholic Press or an association for those working in the field.

After four previous attempts failed, the Catholic Press Association was organized at a meeting at the Chittenden Hotel in Columbus, Ohio, August 24-25, 1911. About 60 delegates representing 37 publications attended, including a half dozen women, almost two dozen priests and more than 30 laymen. The aim of the new Association would be to publicize news of Catholic interest, combat the negative influence of some of the secular press, develop a news service, secure national advertising and agitate against higher postal rates.

By 2018 communication professionals made up 18% of association membership and the CPA was becoming a multi-media organization. The awards program now managed entries for print and digital publications, web-based publishers, book authors, university student publications and alumni magazines, as well as radio, television and film broadcast work. It was becoming the umbrella organization of Catholic communication.

While print publication membership was declining, communication and digital media members were joining. Therefore in 2019 the association launched an intense research study to determine the best way to identify its new role and brand. In September 2020, members voted to make two major changes in its structure as defined by its bylaws.

We, the Catholic press, face the same challenges that existed nearly 200 years ago: explaining and defending the Catholic Church.

Today the CMA provides a variety of programs to support members facing those challenges: