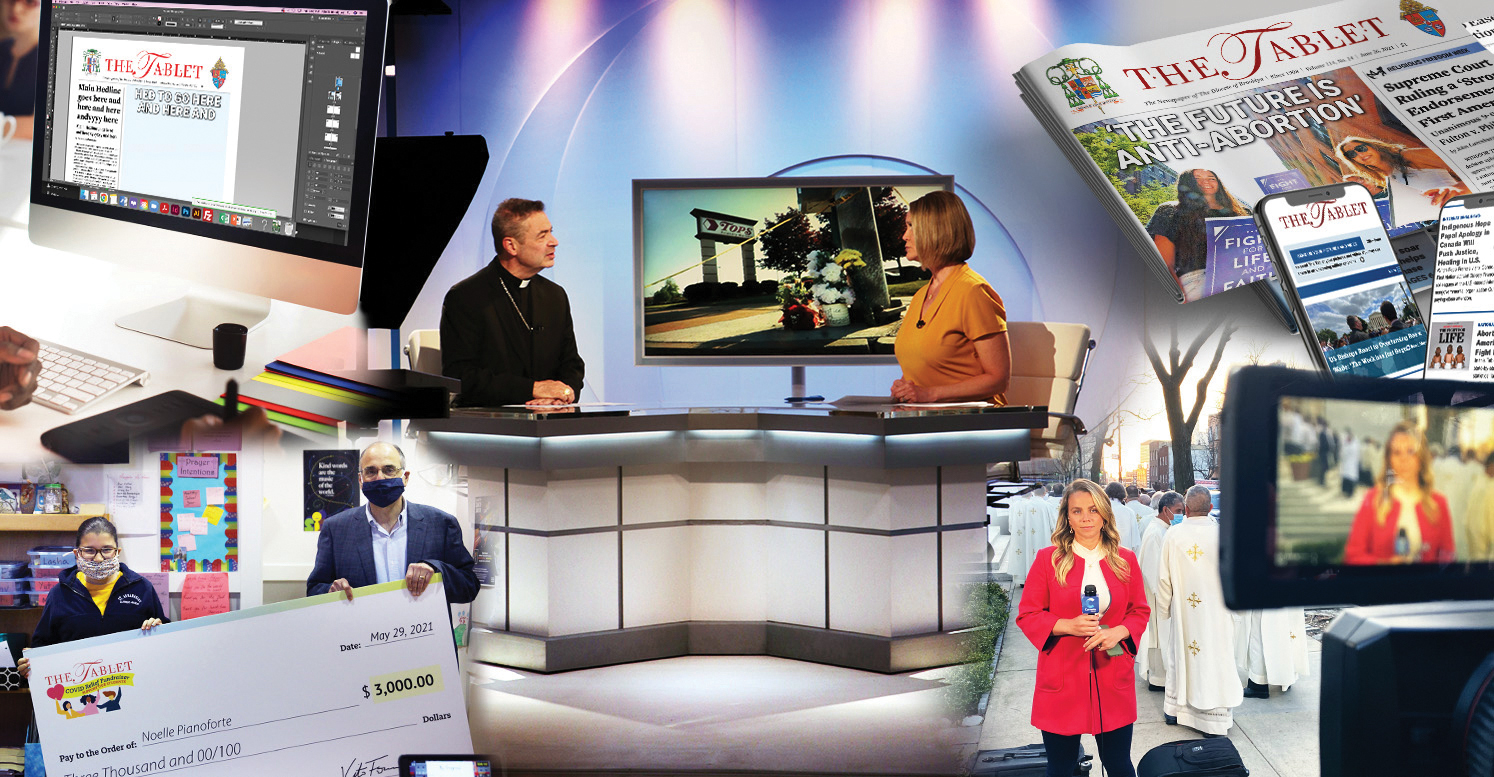 By Sharon Boehlefeld
The Catholic Journalist

A combination of factors made it seem like now is the right time to give newspaper readers in the Diocese of Brooklyn a chance to step up their support.

First, the USCCB announced it would close Catholic News Service in December.

Then, the neighboring paper, Catholic New York, said it would cease publication in November. That was a second blow for New York Catholics, who had already lost the Long Island Catholic in 2021.

The Tablet, and its sister Spanish publication, Nuestra Voz, would soon be the only Catholic newspapers in the New York City metropolitan area.

But those bleak announcements came at a time when the team at DeSales Media, the diocesan communications arm, was already hearing from readers willing to step up their support.

“People already were seeking to give more than their subscriptions,” said Leonard Camporeale, director of Marketing and Digital at DeSales Media. “The readers were already saying this to us, ‘We’re participants in this Catholic mission of sharing the faith.’”

“We felt there needed to be another level of involvement with the readers,” said Vito Formica, executive director of News Content and Development at DeSales. “We needed to offer them membership where they feel they are keeping the voice of Catholics alive.”

So, after conversations and research, the Tablet used its Sept. 17 front page to invite readers to become members.

Catholic print media faces many of the same challenges as secular media across the country, for example, rising paper costs – 30% this year, increasing social and digital media competition, and flagging interest in print products among some readers, especially younger people.

“We have to be creative as editors. We can’t just sit back and let the cards fall where they may,” Formica said. “We may be great at telling other people’s story, but not so much ourselves. It’s important to sell yourself.”

Formica also said it is important to maintain high quality in Catholic media.

“Real journalism is about research and being fact-based and being objective and telling the full story. So, for us at The Tablet, we want the product to be really strong,” he said. “We want to tell really good stories, provoke a little, get them (readers) involved.” 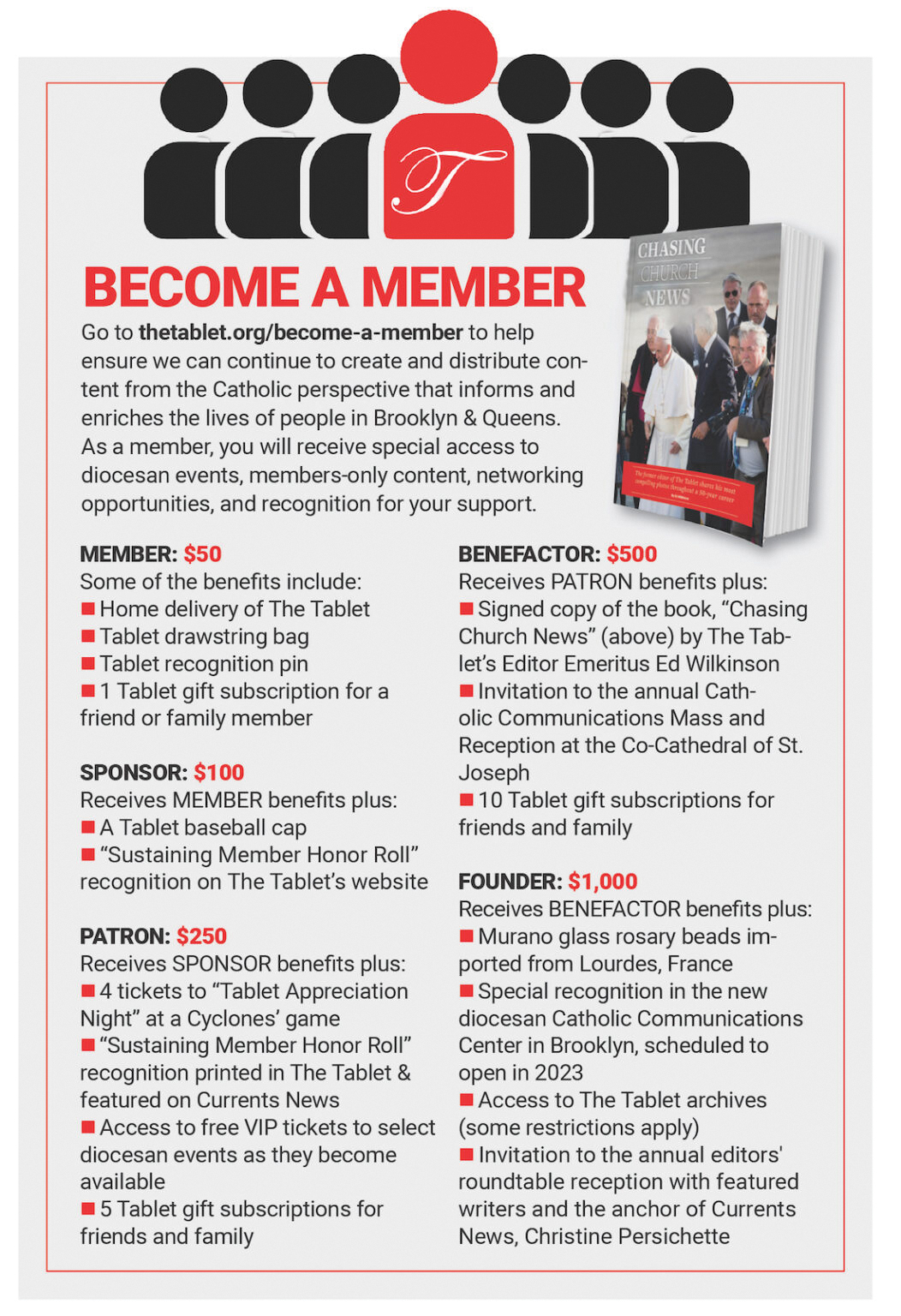 “We believe we bring the best of what journalism has to offer each week,” said Jim DelCioppo, editor of The Tablet, in the story announcing the membership program. “We strive to give people all the facts so they can form their own ideas. To only know one side is to be uninformed. We offer balanced coverage.”

But The Tablet is just one part of what Camporeale, the marketer, describes as an “ecosystem of communication.”

“First, the Tablet is more than a physical newspaper people receive. It’s a daily news platform feeding content to people on the web and via email, as well as the physical paper people love,” he said.

“Second, content published by The Tablet is shared with and seen in secular media and helps explain the Catholic perspective to a wide audience.

“Third, more than 25% of our subscribers make donations when they subscribe, telling us that they understand the value of The Tablet is more than the paper they receive,” he said.

“So why were we looking (only) at subscriptions to fund the whole ecosystem?”

That “ecosystem” also includes Nuestra Voz, the Spanish-language newspaper, and the websites for both newspapers, as well as an archive of physical papers going back to 1908, the founding of The Tablet.

“We are actively recording history for the diocese and the Church,” Formica said. “We cover the faith in action, how people are taking their faith and applying it to the community around them.”

A point of pride to the DeSales Media team is its nightly newscast, Currents News, on NET-TV. The program, anchored by Christine Persichette, is a 30-minute broadcast of Catholic news from the diocese and the beyond.

The membership plan, “began with colleagues in marketing and with CEO (William) Bill Maier,” Formica said. “We thought this would be an interesting model and started researching, finding models, finding ways for people to come in at different levels and … receive different gifts and perks.”

The membership roll-out offered levels from $50 to $1,000, and benefits start with home delivery for the member, plus one gift subscription. Basic membership also includes a drawstring bag and recognition pin.

Despite that, he said, many subscribers turn down the discount and pay the full $50 annual rate, which breaks down to $1 for each of the 50 issues The Tablet publishes every year.

Levels and membership gifts vary at each level, with each higher level receiving all the benefits of lower levels plus additional gifts, including invitations to the annual Catholic Communications Mass (at $500) and to the annual editors’ roundtable reception (at $1,000).

One gift for $500 and $1,000 members is a signed copy of the book “Chasing Church News” by Ed Wilkinson, The Tablet ‘s editor emeritus.

Early response to the membership plan has been good. In fact, Camporeale said, the first Founder level member – at $1,000 of support – joined in the first week. The DeSales team will be watching closely during the first year, and may make tweaks as they gauge response to the plan.

“This is the time – not when you’re about to close – to let people know … we need the support to keep … Catholics alive in the media landscape,” Formica said. “There are so many voices out there, you need to have your story told in a way that people know is credible.”

This article originally appeared in the October 2022 edition of The Catholic Journalist.