Member Spotlight: Allen Kinzly, Multimedia Specialist and Videographer for the Archdiocese of Atlanta

Tell us a little about your background and how you got into Catholic media.

I graduated from the University of Georgia with a Sport Studies degree and a minor in Mass Communication. My last year I did an internship at the Fox TV affiliate in Atlanta and fell in love with local news/sports.

Soon after graduating I went into local news as a sports anchor and reporter in Savannah, Georgia. I was in TV for about nine years. After getting frustrated with a lot of things, but mostly the crazy hours of TV, I was on the lookout for something else to do with my life but was hoping it still had something to do with video production or creative content.

My sister is a high school math teacher and was looking to move from public school into a Catholic school, so she was searching the Archdiocese of Atlanta job listings when she saw a newly created job called “multi-media specialist”. She said that it sounded like something I would be perfect for.

I hadn’t even thought about the Catholic Church having a position like this, but my faith is important to me and I knew I had the skills, so I checked out the posting, applied, and ultimately got it. I will have been at the archdiocese for eight years now this coming July. I tell people that my current job is a lot less stress with a lot better deadlines than TV news! However, I still freelance for the local ABC station covering football in the fall, so I can still get a feel of that newsroom deadline rush every once in a while!

Could you talk a little bit about your job and what you do?

Even though my official title is multi-media specialist, I like to refer to myself as a video producer, since that’s the majority of what I do.

I make training, promotional, fundraising, educationaland ‘highlight’ videos. I shoot and edit my own video, write scripts, work with different departments that need a specific video and cover the happenings throughout the archdiocese.

I also work with my fellow Communications Department staff and the Georgia Bulletin newspaper to make sure our work is posted on social media and promoted throughout the archdiocese.

Since the start of the pandemic, I have found myself doing a lot more livestream work. I was the project manager for the archdiocese as we installed and upgraded our livestream and video conferencing equipment at the Cathedral and the Chancery office. This gave us the ability to offer livestreamed daily Mass, which has now been a major part of my job. Once word got out, I became a consultant for the different parishes and schools as they try to implement or have questions about their own livestreaming systems.

Why is video an important way to reach Catholics in your diocese?

Video is the way of the world these days. It’s everywhere. So, if we want to reach Catholics and even non-Catholics, we have to have a video presence. Everyone is on their phones or computers for a large portion of their days and most of the time video is a large part of the online experience. The recent pandemic only amplified how important video is! Video can be eye catching and informative. People can watch it with sound or without sound. 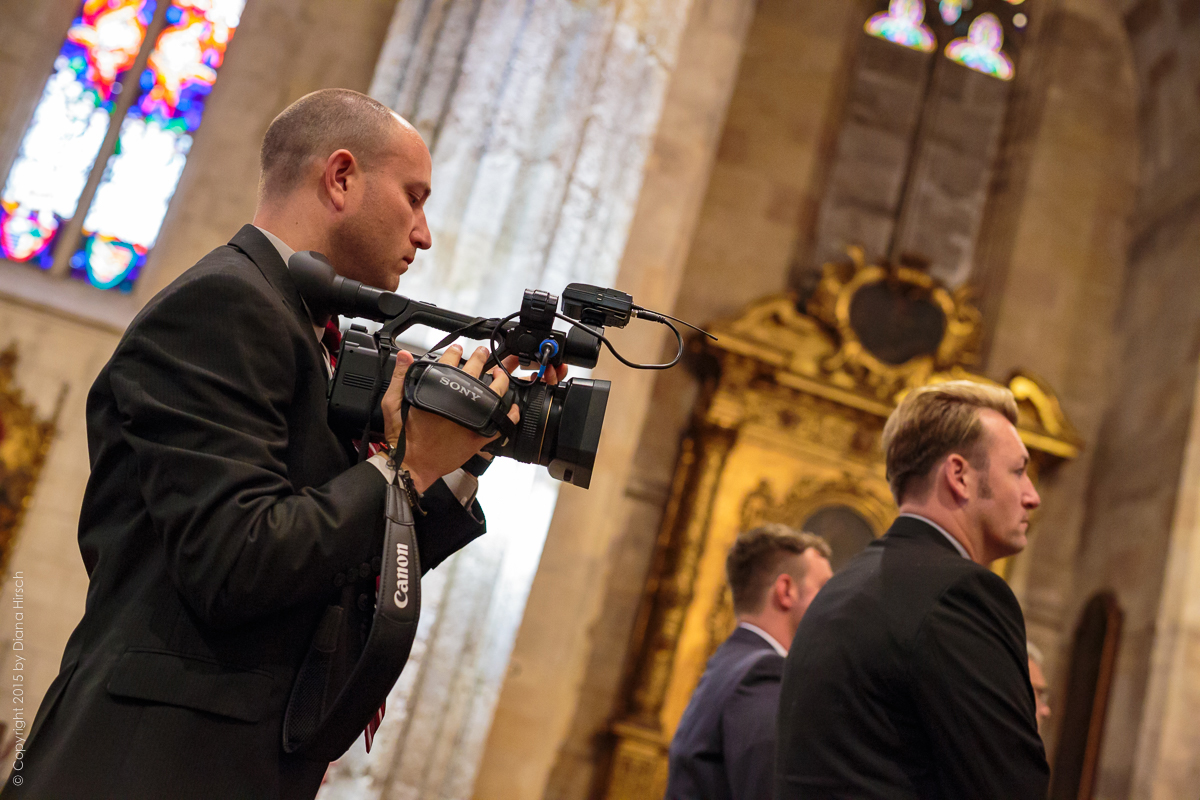 Video can hit highlights of what you want to say in a faster way than reading a recap of something. So, for the Archdiocese of Atlanta (or any Catholic organization, really) to be able to share the Good News and Evangelize to the best of our ability, we have to meet the people where they are, and right now, that is in technology and video.

Livestreaming was pushed to the forefront when the world shutdown in 2020 and even when things start to get back to ‘normal’, whether you like it or not, livestreaming is here to stay. It might not have the emphasis it did throughout the pandemic, but you will always have the relative who can’t be in town for a wedding or funeral, or a sick or elderly person who wants to participate in Mass but can’t make it on a particular day. You want those people to feel like they are still participating and active in the service, so making it a bright, clean and attractive production will go a long way in helping that person feel included. Livestreaming and video is just another way to meet the people where they are and build the bridges to welcome them to the Church.

What has been the biggest challenge in this job?

My job was a brand new position that was created because the now Cardinal Wilton Gregory and others at the Archdiocese had a feeling that video was going to be important.

So at the beginning, the biggest challenge was to create what I wanted this position to be and to inform people around the Archdiocese who I was and what I could do to help them.

Now, video is such a big part of the world these days, it is exciting, but also challenging. When the pandemic hit, I had very little livestream experience and I was charged to put together something at the Chancery within about 48 hours. It was a huge learning curve that came with a lot of hiccups, but I made it work and still have a lot to learn.

The hardest part now is to “keep up with the Joneses.” Everywhere you look, someone has a cool video or a different way of presenting their message. So I have to try and keep up with all the latest trends and changing video styles that people are used to and see on a daily basis.

The problem is that I am a “one man band”, so I don’t have a bunch of people around to help me with different projects or the time to really focus on one project for an extended amount of time. You see everything from advertisements to sports hype videos to movie trailers to TikToks and they all have a different vibe and style, but they are all popular. So I have to work to try and get my videos noticed in middle of all that other noise. It’s fun and exciting, but very challenging. And I’m my own worst critic, so I never think anything is good enough!

What has been your favorite video project?

One of the things I love about my job is being able to get out in the Archdiocese and be able to tell the many stories of the people and places of this very diverse and faith-filled community, so there are many projects that I love to tell people about. But I think my favorite project was a video series I did called “Ask the Archbishop.” When Cardinal Wilton Gregory was Archbishop here in Atlanta, one of the things he loved to do when he would visit schools was to allow the students to ask him questions.

So I thought it would be a fun project to film kids asking him questions and then editing his reply onto the video. I went around to a handful of our Catholic schools and had some kids ask him a variety of questions. I put them all into one video, then I filmed Cardinal Gregory watching the video and answering each question on the spot.

The result was a really authentic and fun way to get to know Cardinal Gregory. I even added different sound effects and fun graphics on top of the video to make it a little more kid-friendly. The result was a hit! Everyone loved the videos and I eventually had other Catholic schools and youth groups reaching out to ask if I could come film their students asking a question.

I released a new video every month for an entire year. It was a lot of work, but a lot of fun. And now we have a new Archbishop, so I might have to bring the series back with a new person to ask!

Do you have any advice for CMA members that are interested in starting to do video?

Just try! Video production can be very intimidating at first, so don’t be scared. Just come up with an idea and give it a shot. The more you do it, the more comfortable you will be filming and editing and the better you will get because you will find out what works and doesn’t work.

There are a lot of tutorials online to help, but sometimes trial and error is just as good. The key is to think about who will be watching your videos. You want people to watch, so you have to make it attractive. That may mean keeping your videos very short or making them flashy and eye catching.

And you can use any kind of equipment. A lot of cell phones have great video quality, so you don’t even need a fancy camera at first. If you do use your phone, remember to film horizontally (think about your computer screen or TV, they are horizontal, not vertical), make sure you have a tripod or some other way to stabilize the video and make sure there aren’t any distracting background noises.

A rule of thumb: if you don’t even want to watch it (or get bored after a couple minutes), who else is going to? Make sure you enjoy the video you’re making! Feel free to reach out to me if you have any questions or ideas!

I love being a part of the Catholic Media Association.

When I attended my first Catholic Media Conference, I realized that I was very lucky in that I was able to do video production as a full-time job, and not have to juggle being an editor or communications director or photographer in addition to that.

Being able to connect with other people, lead a couple sessions and provide tips and offer support to those just starting video in the Catholic world has been so fun and rewarding. Now, the group of video producers is getting bigger, so it’s wonderful to share ideas and best practices to help each other ‘up our game.’

Examples of my work:

This article originally appeared in the March 2022 edition of The Catholic Journalist.