Only God knows the reach of Catholic media

Talk a little about your background and how you decided to work in Catholic media. 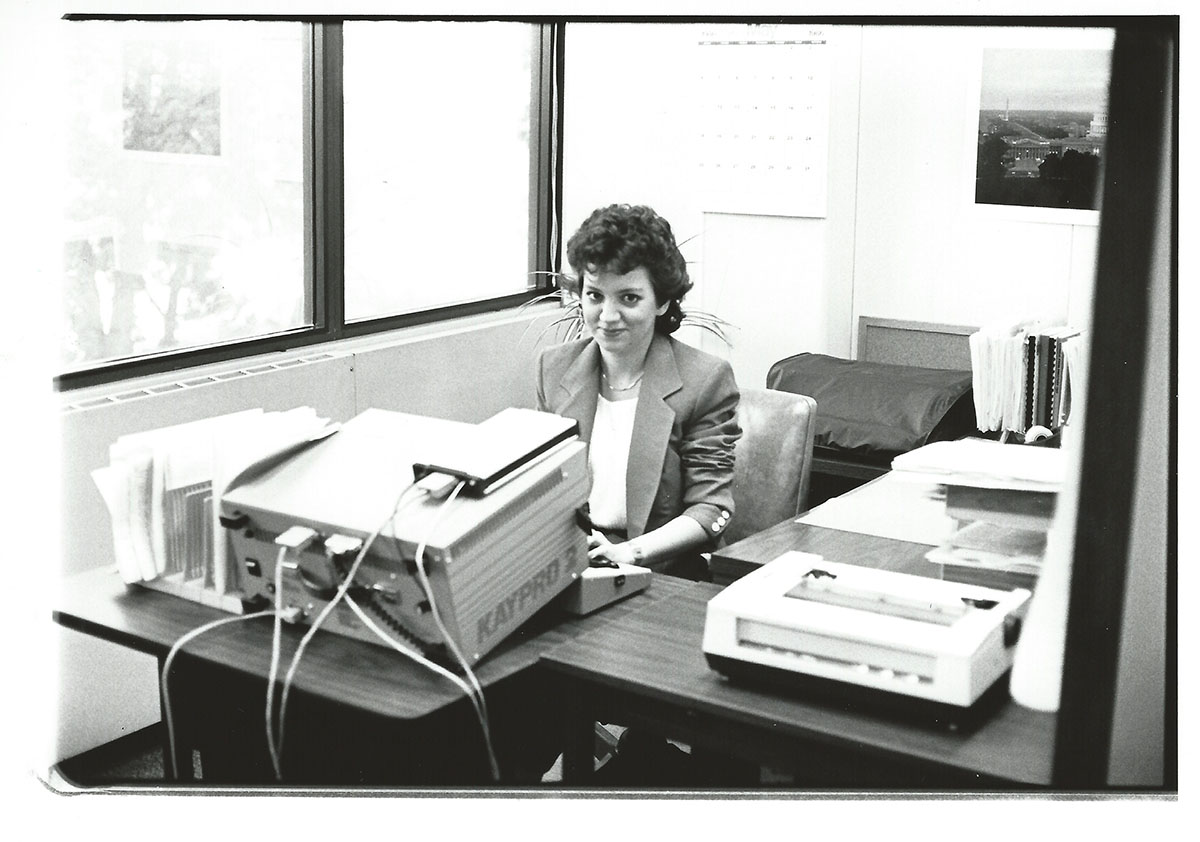 When I started as editorial assistant at the Catholic Herald many years ago, it was my third newspaper and my first Catholic publication. A friend had sent me the job opening; I had never heard of the Herald. It was kind of a best-kept secret in those days.

I worked under Charlie Carruth, the founding editor, and Mike Flach, the managing editor. To say things were different in those days, well that’s an understatement.

We had typewriters, IBM Selectrics decked out with a backspace erase key, and we did paste up with strips of formatted columns, waxers, rollers and Exacto knives (pro tip: never use it to peel an orange, ouch). We would drive to the printing plant in Gaithersburg, Md., at 6 a.m. every Wednesday to proof the galleys and make final edits. We’d go to breakfast while the press started our run. And we’d return to inspect the first copies off of the press.

We shot on film cameras, waited a day to get prints back, sent them to the plant, and waited another day to get the dummies back. The progression to using digital cameras, and cell phones, has sped up the process — tremendously.

We got Kaypro computers shortly after I started. They had detachable keyboards and the boss insisted we button them up and cover the machine with a plastic dust cover — every night.

We were trendsetters though. First with the Kaypros, then to desktop publishing in the 1990s. We bought early digital cameras, digital tape recorders, a video camera. Our website, catholicherald.com, launched in 1996. I had one of the first car phones — hard-wired into the car.

In 2017, I started the Herald podcast recording in a small closet lined with acoustic tiles and a stick-on light. Our social media presence goes back nearly two decades, and we have a very successful e-newsletter with impressive open rates. Just a couple years ago, I led us through the CMA-sponsored Kilian Schalk project to completely revamp our workflow. We went from being paper-dependent to paper-free.

So, I hadn’t set out to work in the Catholic press, but it’s a great gig and it’s been rewarding to help the Herald keep pace with advances in journalism. I still have my Exacto knife and photo sizing wheel.

As managing editor of The Arlington Catholic Herald, what is a typical day like for you? 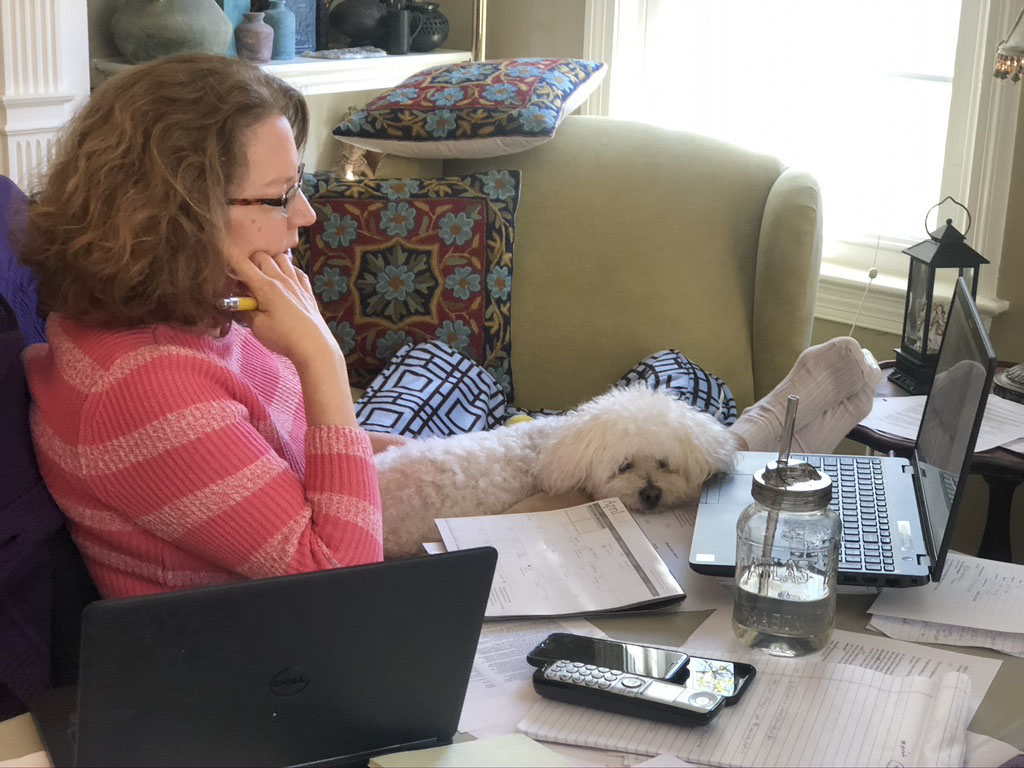 A typical day revolves around news. I skim the Washington Post and other secular pubs online, check out the CNS schedule, review my email, listen to WTOP (our local news radio all day), and chat with staff about the latest leads.

The editorial staff meets a few times a week to prioritize coverage and update everyone on the plan for the next print issue and the daily online grind. We meet with the communications department weekly.

Most days start with a plan in my head for what I’m going to tackle. Most days, those plans are diverted within a half-hour by something more pressing. But that’s why no two days are the same. There’s always a challenge and often something “breaking.”

I spend a great deal of time editing staff and freelance articles, pulling CNS copy and photos, responding to emails, the occasional snail-mail and a few calls.

But as managing editor, I’m responsible for strategizing our coverage, working with the editorial and advertising staff, planning the print issues, editing all the copy and coordinating accompanying art, doing some design, and editing page finals. Then there’s feeding the website, prioritizing what’s covered in the e-newsletter, and even a bit of marketing with circulation and social media staffers. An occasional podcast and a weekly radio news spot keep things hopping. Never a dull moment for sure.

You have traveled a lot over the years, what has been your favorite trip and why?

I have been fortunate to have traveled a bit.

One of my first trips was to the diocesan mission in Banica, Dominican Republic. It coincided with Pope John Paul II’s visit there for the quincentennial of Christopher Columbus’ visit to the island. After covering the pope’s visit, we went to the western side of the island on the Haitian border. We drove to the end of dirt roads and set out on foot crossing rivers and climbing hills to meet families who had little. A young man with birth defects that left his legs folded under him picked his way up a dirt path on his hands. He was blind but he heard there were visitors with the priest serving there.

The priest asked Juan if he needed anything. Shyly, he said, “If I had a guitar, I could play at the Mass you come to every month.” I choked back my tears, wrote about this in my story, and Juan got his guitar, extra strings and more. That trip left a lasting impression on me.

But there have been so many others. Visiting the leper colony in Jamaica, seeing firsthand the work of relief organizations in El Salvador, Honduras, Guatemala and Mexico. I’ve made several trips to what I call “the home office” in Rome, including papal Masses, consistories and even Christmas Eve Mass with the pope. I visited Saint-Omer in France where some of the first Catholics in the colonies had attended boarding school. 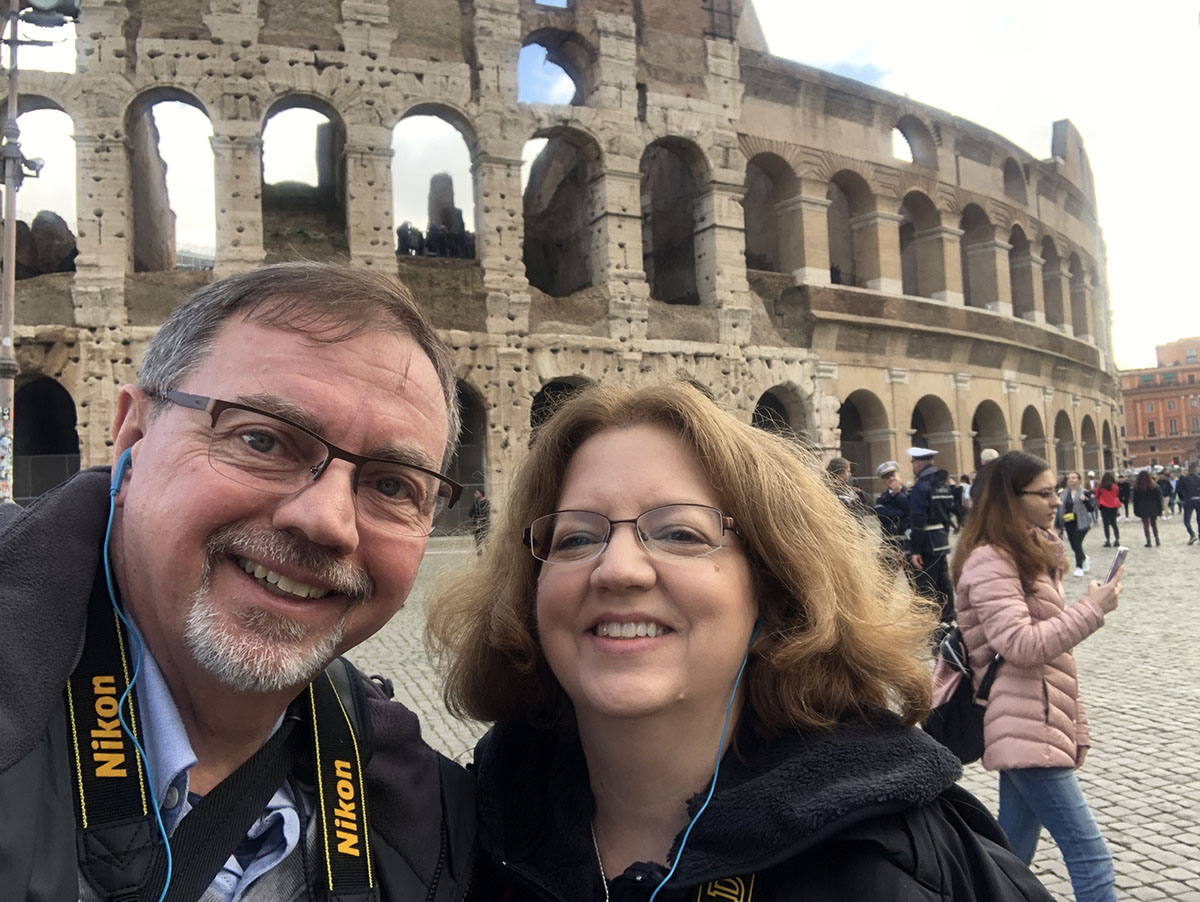 There have been some wonderful pilgrimages, often sponsored by the Catholic Herald and the Catholic Review in nearby Baltimore, including in the footsteps of St. Paul to Greece and Turkey.

Some travels were because of my leadership role with the Society of Professional Journalists. I wrote and delivered a white paper on the globalization of media in Greece and became a charter member of the East Asian Journalist Association during a trip to South Korea.

In Cambodia, I saw how the jungle grew into historic stone structures to become one, I sailed down the Mekong River in Vietnam and navigated the busy streets of Tokyo.

Every trip I’ve made, I’ve been able to find a Catholic story.

A trip to Germany in 2006 was a last-minute decision that proved to be one of my best. Fellow Catholic journalist, Christopher Gunty, a handful of our peers and I covered Pope Benedict XVI’s trip home to Bavaria, and we stayed behind to do stories on his homeland. On that trip, Chris and I started dating and after 14 years of marriage, Oberammergau, the town where our story together began, still holds a special place in our hearts.

We returned for the Passion Play in 2010, leading a group of pilgrims to see that and the Shroud of Turin. And we returned in June this year to see the play that was postponed two years because of the pandemic.

Your husband works in Catholic media as well, talk a little about how that works in your family.

Nice segue into this question.

Yes, Chris is associate publisher and editor of Catholic Review Media in Baltimore. He’s worked in all four regions of the Catholic Media Association: at the Chicago Catholic; he founded The Catholic Sun in Phoenix; ran all six editions of the Florida Catholic; and a year after we married, he started working at the Catholic Review in Baltimore. A former Catholic Press (Media) Association president and a fellow Franny winner, he’s invaluable as a peer, and an amazing husband and father/grandfather.

There’s a lot of shop talk at the dinner table, and a side of healthy competition. When we both were running weekly publications, we didn’t divulge everything. When we’ve had the chance to collaborate, such as assignments in Rome doing articles, photos, blogs, social media posts and radio spots, it’s been a blast. We pulled an all-nighter during the 2012 trip to cover the consistory for former Baltimore Cardinal Edwin F. O’Brien, and though exhausting, it was some of our best work together. We also won first place honors from the CPA for our joint coverage of Pope Francis’ stop in Washington during his 2015 trip to the U.S. for St. Anthony Messenger. We are each other’s favorite — and toughest — editors. 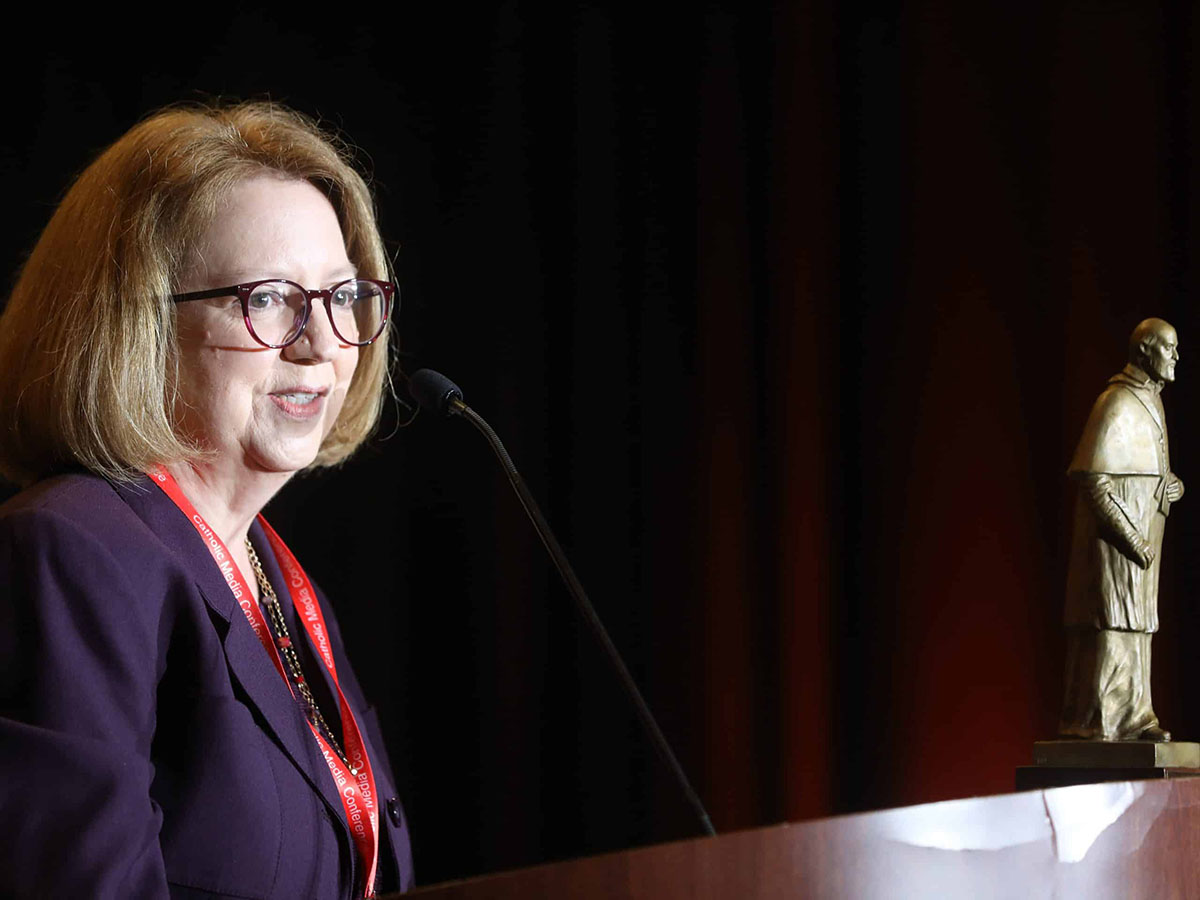 Why do you think Catholic media is important?

Where do I start? At the core, it’s about solid journalism. Without that base, it doesn’t matter what we do.

The Catholic faithful have a right and an obligation to be informed. If we don’t deliver something to them, most of them aren’t going to seek out the Catholic perspective on the news.

Often, the stories we cover are ones you don’t see anywhere else. Secular media doesn’t usually cover the Catholic Church unless it’s a scandal. They aren’t going to cover the woman who’s been a lector for 70 years, or the Eagle Scout with Down syndrome who built a “Little Free Library” for rosaries.

Our mission is to tell the story of the Catholic Church, locally and globally.

We hopefully inspire people with our stories, engage them not just with social media but with our print product, website and e-newsletter. We strive to be relevant when the culture tells people religion isn’t all that important.

There are so many stories to tell and faith elements to share. If a bishop is looking for an effective evangelization tool, I can’t think of anything better than a printed news publication that sits around the home and gets picked up by nearly every member of the family.

I often joke that I want to put an Apple AirTag on an issue of the Catholic Herald to see where it goes. Maybe it gets picked up at the newspaper box at the Metro station, gets left on a coffee table at work, moves to the lunchroom and find its way in a backpack headed home to a family, where a parent might pick it up and leave it with a sticky note on the kitchen island for the high school teen to see the story on their science fair. A grandparent might pick it up and be moved to make a donation. Win-win.

What are your hopes for the future of Catholic media in light of the many changes being announced lately?

My hopes are related to why I think what we do is important.

I fear that decisions being made now will prove short-sighted. It might take a few years, but when the reach of print and its evangelization aspect are a distant memory, it will be difficult to recreate the caliber of Catholic journalism we have throughout the U.S. and Canada now. It’s so disturbing to see Catholic News Service being closed, and so many award-winning publications disappearing.

The dioceses that support their news operations understand the value and benefit of the evangelization component and the need to communicate with their members, many of whom are donors.

Call it accountability — where their donations go, how the church responds to abuse cases and how church teaching is conveyed to students and put into practice through charitable ministries. Without sharing these stories, the readers — supporters — are left in the dark. Solid Catholic journalism keeps people informed and builds trust. It tells the story of the church.

I am constantly in awe of the great work being done by my peers in the Catholic press. I’m preaching to the choir, but sometimes you have to call an audible. I don’t think any of us realize the impact or the reach of our work, truly, “only God knows.”

This article originally appeared in the September 2022 edition of The Catholic Journalist.