'I have great hope for the future of Catholic media, and I am excited to consider myself a little part of its future'

Talk a little about your background and how you decided to work in Catholic media. 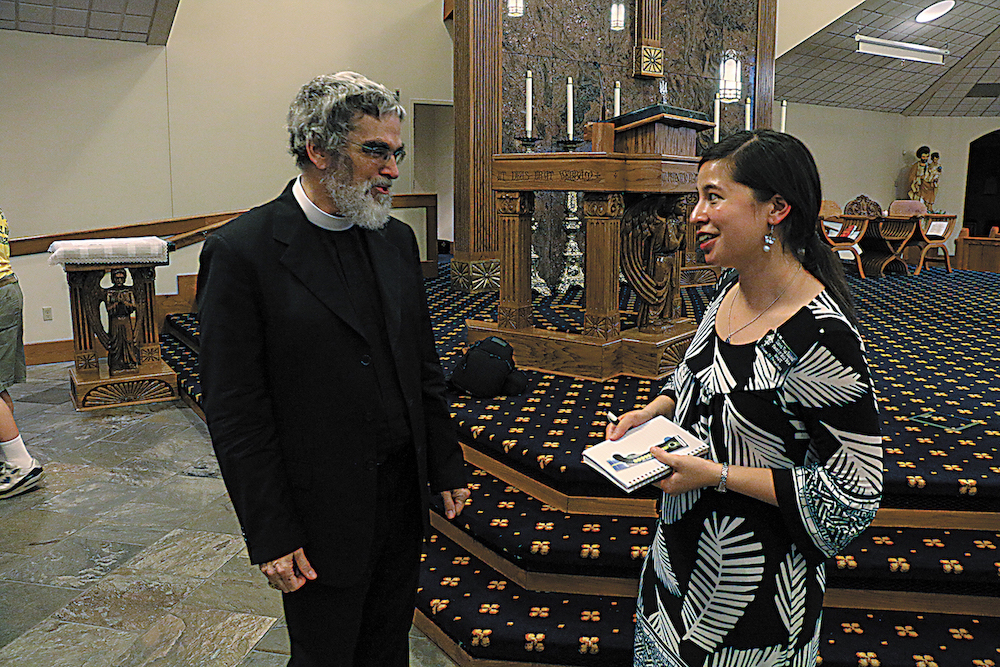 I have loved storytelling and writing from an early age. I majored in communications with a journalism concentration as a student at Franciscan University of Steubenville, so perhaps it was assumed that if I continued into the media field it would be Catholic media. I spent a semester in Washington, D.C. with a journalism program and applied to several of the recommended internships, including Catholic News Service and The Washington Times. When I was accepted to The Washington Times, it became something of a personal test for me – could I thrive in the secular media world? The experience was as grueling and instructive as any internship would be for a naïve college sophomore thrown headfirst into the newsroom. But at the end of the semester my conclusion was yes, I could see myself probably becoming a mainstream journalist.

After graduation I applied to both secular and Catholic media positions, and was hired as a reporter for The Michigan Catholic in the Archdiocese of Detroit. That set the trajectory for my becoming a Catholic journalist and realizing this is an actual vocation, and the one to which I was called. I learned a lot during my time in Detroit, including the photography side of things – I still remember admitting in my interview that I knew very little about photography, and being astonished when editor Mike Stechschulte had me take a camera on one of my first assignments. (Clearly, I had a lot to learn about the multiple hats worn by Catholic journalists.) But it was in Detroit that I witnessed how huge and diverse and unparalleled Catholicism is when seen through the eyes of a Catholic journalist.

I am far from the first person to make this connection, but the array of people and liturgies and communities and heartbreaks and celebrations showed me that our Church is like the T.A.R.D.I.S. in Doctor Who – so much bigger on the inside. This fact rang just as true when I arrived in Owensboro in 2015 and began exploring what it means to live Catholicism in western Kentucky. To this day I consider it a gift and a privilege to be able to tell these stories.

Elizabeth Wong Barnstead interviews Brother Guy Consolmagno, SJ, director of the Vatican Observatory, when he was in Hopkinsville, Ky., for the August 21, 2017, total solar eclipse, whose epicenter was in Hopkinsville. Brother Consolmagno gave a presentation at Sts. Peter and Paul Parish in Hopkinsville the day before the eclipse. (Photo by Laura Rigsby, WKC)

As editor of The Western Kentucky Catholic, what is a typical day like for you?

I came to Owensboro in 2015 and helped reorganize the diocese’s communications department and introduce more digital aspects, but it was essential that the newspaper remain. Since there are only three of us in the Diocese of Owensboro’s communications department, we – myself, communications director Tina Kasey and digital media specialist Riley Greif – are rarely bored. Besides serving as the editor, I am also the copyeditor and primary reporter, a photographer, and operate westernkycatholic.com. Riley balances videography and social media, which includes all of the diocese’s social media platforms; I assist with those as I can. During press week (we print monthly), Tina and I delve into the puzzle piece that is our 32-page paper. In addition to being an amazing communications director, Tina does all the layout for the paper and juggles her other countless tasks with the assembling the WKC. I also proof and edit content for other diocesan offices such as annual reports and letters from the bishop. When it’s not press week, I might be working on my own stories, copyediting others’, building social media graphics, or scheduling content to post on the website. Or I might be out in the diocese somewhere interviewing people or photographing a diocesan event.

What are your favorite types of stories to do and why? 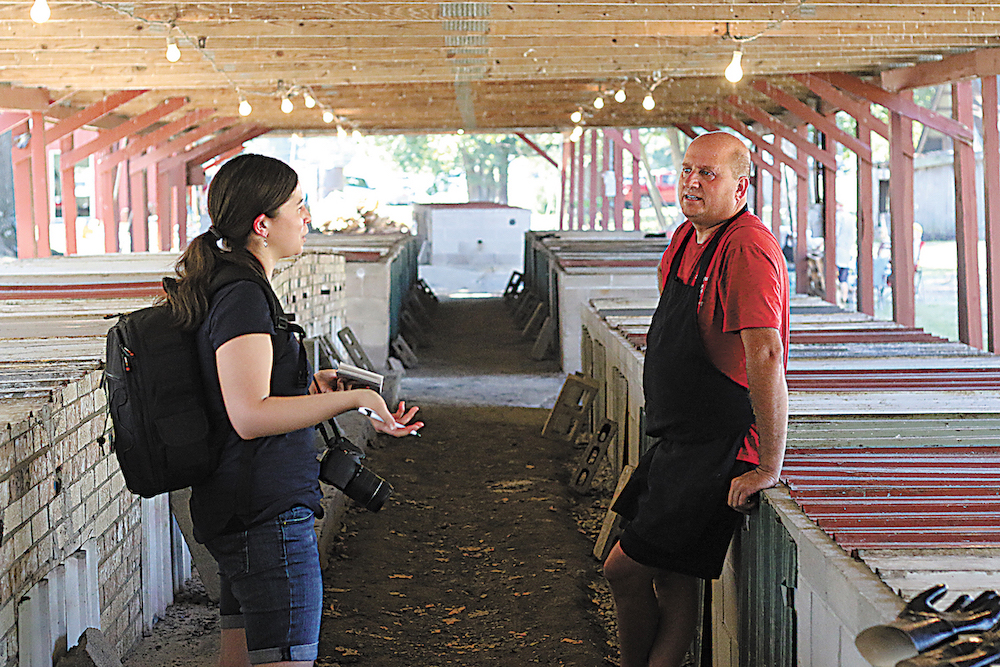 Big, feature-y, human interest stories that explore how someone has thrived despite challenging circumstances. I love sitting down with people and just listening to what they have chosen to share with me, a total stranger. These are often the hardest stories to listen to, and they’re even more difficult retell in writing. But when I can successfully tell a person’s story, even if it’s hard, I see this as the heart of my vocation as a Catholic journalist. Doing these types of stories has also taught me how to strive for empathy both in interviews and in daily life when I’m not on the job. I have learned that I can only truly understand someone’s perspective by listening with intention, and why should that be any different when conversing with a friend, a family member, or someone with whom I may not agree?

Why do you think Catholic media is important?

Catholic media has the twofold role of telling inspiring stories that speak to the heart of the deepest human and spiritual conditions – as well as providing opportunities to challenge injustices witnessed within this church we call our home. For a long time, I focused on the first half, pumping up people with joyful stories of our faith. As I mentioned above, those are still my favorite kinds of stories to tell. But after 2018 and McCarrick, and everything that has followed, I’ve come to see that Catholic media serves an equally important purpose to speak truth to authority. I believe many mainstream media outlets did a great job of covering McCarrick in the beginning, but they often lacked the nuance and insider-baseball expertise of Catholic journalists. Plus, Catholic media has more of a reason and investment to continue follow-up coverage on such crises even years later. It is in situations like these that Catholic media embraces its full responsibility to inform and educate our fellow faithful.

During the August 4, 2018 Fancy Farm Picnic at St. Jerome Parish in Fancy Farm, Ky., Elizabeth Wong Barnstead interviews Russell Ellegood, who is on the barbecue pit team, about the annual event that draws thousands to the small western Kentucky town. (Photo by Laura Rigsby, WKC)

What are your hopes for the future of Catholic media in light of the many changes being announced lately?

I am guessing this is in reference to the closure of Catholic News Service’s domestic services at the end of this year and the closure of other Catholic newspapers. I was saddened when I learned about CNS and the others, especially since CNS was super helpful and supportive in getting my coverage out there immediately after the December 2021 tornadoes devastated western Kentucky. I still credit CNS for sharing our story with the wider world, which resulted in an incredible outpouring of financial contributions to our diocese’s tornado recovery efforts from all over the country. Plus, working with Julie, Greg, Bob, Tyler and the rest of the team was quite affirming to me, a small Catholic journalist in a small corner of Kentucky, that what I do is legitimate and needed. So, the announcement about the closure was unexpected and unfortunate. Even with these changes, however, I do not feel that Catholic media is going to die. There are too many stories to tell, too many people in need of hearing the Gospel, and too many committed, dedicated individuals who are powering through these changes and pivoting when necessary, for this field to disappear. I have great hope for the future of Catholic media, and I am excited to consider myself a little part of its future.

This article originally appeared in the October 2022 edition of The Catholic Journalist.